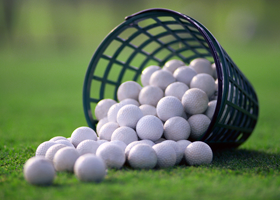 What is the difference between expensive balls and inexpensive balls and why should I play them? There are very technical answers to this question which can be found on the web. If anyone is interested in polybutadiene or Ionomeric casing layers then please feel free to take a look. However for my golf pro brain this really doesn’t mean too much to me, so in Lehman’s terms what’s the main difference? In my mind the major factor is SPIN RATE around the greens. Spin rate is the amount a ball spins backwards after being hit by a golf club. Different golf balls will have different levels of spin even if they have been hit at exactly the same speed with the same club. In this day and age we have robots that we can set to swing a club at the same speed and measure the spin rate of a golf ball.


In 2010 Golf Digest published the spin rates of golf balls hit with half wedges to see what effect the different balls produced. The dispersion of spin rate was significant.The cheaper golf balls spun considerably less, as low as 3000 RPM compared to the majority of more expensive balls that spun at close to 7000 RPM. When they measured the spin rate of golf balls with Drivers the spin rates were far closer together, within 400 RPM from one end of the spectrum to the other. It is a common misconception that players do not swing hard enough to utilize the benefits of the more expensive golf balls. Professionals on the PGA tour use a variety of swing speeds during a round of golf so the ball has to work for every speed or the pros simply wouldn’t play them. In the case of Titleist the difference in distance between their high end ball and low end ball at any swing speed is less than 4 yards! However their difference in spin for half wedge shots is over 3000 RPM. What this means is that the more expensive balls do not fly in the air much further despite your swing speed but they certainly spin more around the greens which will improve everyone’s scoring shots. If you are struggling with balls hitting the green and rolling past the pin then check which ball you are playing.


Another important difference in golf ball design is what the cover is made out of. Expensive balls such as the Titleist Prov1 are made of Urethane which provides a soft feel but tend to scuff up quicker than the less expensive alternative. Cheaper golf balls like a Titleist DT Solo have a Surlyn cover which is a harder compound but lasts longer. So if durability and price is more important than function then stick with the less expensive option.

Practice tip: When practicing your short game use the same brand and model of golf ball that you use on the course. Each ball model spins at different rates which means you will get different results even if you hit the shot exactly the same.