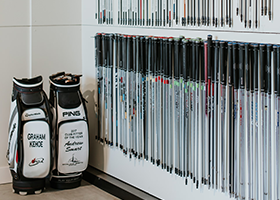 Michelle Wie has assumed the title sponsorship of the Michelle Wie HSJGA Tournament of Champions (MW TOC) at Wailea Golf Club in December. Today, HSJGA has launched an online crowdfunding campaign to raise money for the MW TOC.


Michelle has joined in on the effort by offering "perks" to motivate donations and is lending her vast social media influence to promote the campaign. With just a few tweets from Michelle (@theMichelleWie), the campaign quickly began attracting donations, raising $2380 within the first two hours. Michelle tweeted excitedly; "I can't believe we're over the $2000 mark already! You guys are the best! Let's keep it going!”


The goal--$30,000 and beyond! “It’s just like Michelle to dream big and set her goals high - I wouldn’t expect anything less. Since the day I first met Michelle at age 10 before she hit the national scene, I soon realized this little girl was unique with limitless dreams,” said Mary Bea Porter-King, HSJGA President.


The Michelle Wie HSJGA Tournament of Champions will be a key fundraiser for the HSJGA with the proceeds going directly to operation costs (24 tournaments in 2012), new tournament development and Hawaii youth golf development. With the funds raised through this campaign, Michelle and the Hawaii State Junior Golf Association (HSJGA) are also aiming to start awarding travel scholarships to help juniors travel inter-island and to the mainland for golf tournaments. These scholarships would allow some extremely talented juniors that may not have the resources to cover the high cost of travel the opportunity to compete in the national junior/amateur circuit.


To kick things off, Michelle will match every dollar of the first $10,000 raised! Each of the donors included in the first $10,000 will receive a “shout-out” on Twitter by Michelle herself (@themichellewie). Michelle’s sponsors Nike Golf and Kia have already joined her in support of the campaign. Check back often as the campaign will be updated regularly with more pictures and videos as well as new items to be added as perks.


Perks include:
You may click on the link above to be redirected to the official Michelle Wie HSJGA TOC fundraising campaign for more information and to donate or visit www.HSJGA.org. [email protected] for any questions or comments.


The HSJGA is a registered 501(c)(3) nonprofit organization. All donations are tax deductible in full or in part.


Wailea Golf Club is owned by the GolfBC Group.