The Amazing Race Canada finishes at Nicklaus North in Whistler!


What an Amazing Race to Nicklaus North! 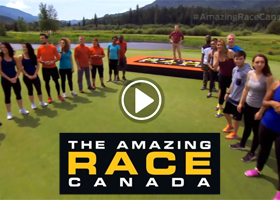 Filmed on May 28th, the finale of the Amazing Race Canada (season 3) culminated at Nicklaus North Golf Course. Finally airing on CTV on September 23rd, the final stretch of the 48,000km race started in Edmonton, briefly stopped in Vancouver and then headed up to Whistler for the majority of the leg.


Teams had to complete challenges at the Squamish Lil'Wat Cultural Center, Bearfoot Bistro, top of the Whistler Gondola outside the Roundhouse and then take a ski jump into the Momentum Ski Camp pool. From there, the Teams received their final clue to find the 12th Hole at our golf course, where they would find Jon Montgomery (host) and the finish line.


"It was definitely competitive to win over the producers to choose Nicklaus North, but during two visits in the winter (one snowy, one rainy) I was able to convince them that (a) it would be sunny and (b) it would be a perfect spot to showcase the beauty of Whistler and the Whistler Valley as the views from #12 are AMAZING", said Mike Zuccolin, General Manager at Nicklaus North.


WATCH NOW: Click HERE to watch the finale and other Amazing Race clips.


We know what made it into the final episode, but what about what happened behind the scenes? What was not shown on TV?
The Amazing Race Canada FACTS: