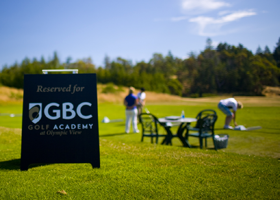 Over the years I have been on the practice tee teaching lessons, overhearing many people saying “I am a great range player but I can’t take it to the course and I don’t know why”. As an instructor I understand how this is frustrating but I’m not surprised to hear it consistently. There are many reasons players have a hard time taking their practice facility game to the golf course.


Could some of these following points be the reason your range game is better than your shots on the course?
The lie of the ball is perfect every time on the practice tee
How many times on the golf course have you had the ball above your feet, in the rough or even when you find a flat lie, it’s in a divot? Has the Practice Facility Hero (PFH) ever practiced hitting shots from uneven lies? In fact how many shots do you hit from perfectly flat lies that are sitting beautifully on the fairway? The answer is usually less than 10% but 90-100% of our practice time is spent hitting shots from these unlikely scenarios... could this be a reason?


There is no pressure on the range
How easy would the game of golf be if there were no trees, ponds or out of bounds to worry about; not to mention the pressure of competition on top of that. The PFH only watches their good shots, when they hit a bad one on the range there is usually a ball scraped from the ball tray before the previous hack has even landed. What makes our game exciting and challenging to play is not replicated on the practice tee. How many times at the practice facility has the PFH had a one shot lead on their playing competitor with one hole left to play when there is a hazard to the right and out of bounds to the left... could this be the reason?


Hitting to the same target and the same yardage over and over
Our friend the PFH loves to aim at one target with one club for a whole bucket of balls...yeah that’s realistic! All the top tournaments in the world from what I can tell incorporate multiple targets using different clubs over the course of 18 holes. Generally, the top professionals don’t hit 36 consecutive 6 irons... could this be the reason?


Even though you make a bad swing you still get good results because of the mat’s forgiveness
This is not a reason that many PFHs think about. When you swing your club and hit the ground behind the ball on the golf course, a chunk of ground propels the ball an undesirable distance instead of the clubface. On an astroturf mat it is impossible to take a divot so the club bounces into the ball with a far greater result giving false confidence to the PFH... could this be the reason?


They forget about the short game
This is probably the most obvious reason why it’s not going so well on the course. If the PFH only hits balls at the full swing area, they are missing HALF of the game that they should be practicing. It is not uncommon for us to hear about players taking 40 putts or more during a round, not including chips, pitches, bunker shots or any other short game skill. It’s comical to think that a player who hits the ball beautifully at the practice facility will automatically be able to chip and putt with no practice... could this be the reason?


No pre shot routine
I challenge you to watch a touring professional just step up to the ball and hit it. This simply doesn’t happen. Each shot has a routine that acts as a mental checklist from the moment the club is in their hands until they start their swing. The PFH may have a pre shot routine but when they are at the practice facility they scrape a ball out of the ball tray and hit it, then again and again, sometimes without even moving their feet! All players should have the same pre shot routine for every shot at the practice facility and on the golf course... could this be the reason?

I am not saying that you shouldn’t spend time on the practice tee. However, you need to spend time there effectively so you can take what you know to the golf course. Please feel free to come and see me, I’ll help you become the player on the course that you already are at the practice facility.