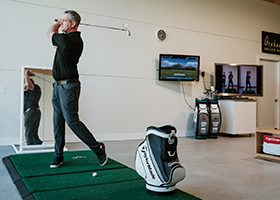 
KELOWNA — These B.C. boys are a tight bunch.


They celebrate their birdies together, mourn their bogeys and motivate each other to play well. They have a lot of fun doing it.


“There is a real camaraderie between us,” says Langley’s Adam Cornelson. “I played a lot of team sports growing up and I never felt anything like it on the golf course until the  last few years with these guys.”


“We get along, we enjoy the banter and play so much together around the Lower Mainland on the Vancouver Golf Tour,” Cornelson says. “There are so many of us. I don’t how many guys on this tour come from the same neck of the woods like we do. These guys are so good. They push me hard. When we go out and have fun matches, if you are not shooting five, six, seven-under you are losing money. It forces you to get better.”


“I kind of compare it to the European Ryder Cup guys,” added Renfrew. “Once they get together they just mesh. We have fun travelling together and playing practice rounds together, money games, going out for dinner and stuff like that. It is awesome to see guys do well and it kind of bumps the other guys along.”


A perfect example of that came last week, when Cornelson went wire to wire to win the Bayview Place Island savings Open at Uplands Golf Club in Victoria. When Cornelson chipped in for birdie on the 18th hole to seal the win, he was surrounded by Clapp, Harlingten and Hay. Someone snapped a photo of their group celebration. When Cornelson saw it, he almost cried.


“I saw the picture the next day and I’m not an emotional guy, but I got emotional,” Cornelson said.


“Fraser sets up these events for us when we are back so I got to know all the guys the last few years doing that,” Harlingten said. “He has been really good at that.”


Harlingten, Clapp, Cornelson and Hay have their own little sponsorship deal with Rite Way Freight Systems of Aldergrove.


“The owner gives us $50 a birdie the first two days of a tournament between the four of us and we pool it all together and split the money,” Harlingten said. “We get all excited for each other to make more birdies.”


Cornelson’s win last week had all the B.C. players pumped about this week. They’d like nothing more than to see back-to-back W’s by B.C. players.


“A lot of the B.C. guys are playing some pretty good golf now, so I think we are all feeding off each other,” said Williams. “When one of your best friends is out there and wins and you play a lot of practice rounds with him, have dinners together, room together, it inspires you and maybe you get a little more giddy-up in your step. It definitely helps.”


They are also there for one another during the inevitable tough times, when putts won’t drop and tee shots won’t find the fairway.


”Everyone goes through ups and downs out here and just to have some support from your good friends means a lot,” Harlingten said. “They can push you to do better.”