The GBC Golf Academy at Olympic View is taking an aggressive approach to getting juniors fired up about the game of golf in 2014 with a multi-faceted community based approach. Over the past two years the Olympic View Golf Club and it’s GolfBC branded GBC Golf Academy has committed to growing the game of golf, grass roots style, by supporting Golf Canada’s In-Schools Golf Program. In 2013 the Olympic View Golf Club adopted three local schools (Happy Valley, Sangster and Wishart Elementary Schools) and implemented golf programs in the school gymnasiums and fields, delivering a golf curriculum to over 2500 students. This year the GBC Golf Academy at Olympic View adopted Dunsmuir Middle School and is working on the program for students of that West Shore educational Institute. Jeff Palmer, the Director of Instruction of the GBC Golf Academy, is enthusiastic about the direction the club is taking as he states, “This has been a very rewarding experience and it has fueled our junior program at the club. Now we are ready to take it to the next level as we have just revamped the junior development system at our club.”


The 'Belt System'
The development program to which Mr. Palmer refers is the new GBC Academy ‘Belt System’ Development Program. The ultimate goal of the ‘Belt System’ Program is to take a beginner junior at the age of 12 and have them move through each level (white, yellow, orange, red, brown and black belts) so that they may become competitive players that have a legitimate chance of playing golf at the US collegiate level. The ‘Belt System’ model hinges on acquiring and developing athletic skill, based on functional movement principles from the Titleist Performance Institute, in addition to learning the fundamentals and advanced technique of the golf swing and short game. Through the GBC Academy ‘Belt System’ Development Program young golfers will also learn mental lessons and life skills necessary for tournament and collegiate golf. Jeff Palmer elaborates,


“Our coaches have vast experience playing competitive and collegiate golf. Our Head Professional, Kevin Maxwell, played at the University of New Orleans and our GBC Academy Instructors, Matt Matheson and Gord Scutt, also attended US Division 1 schools on scholarship. We have the resources to develop competitive golf skill but also to help kids understand what kind of grades they need, how to apply for a scholarship and how to handle themselves once away from home.”


Palmer himself has trained in America at the San Diego Golf Academy and has worked alongside some of the world’s finest instructors including Butch Harmon, Jim McLean, Jim Hardy and Jeff Ritter. Palmer was awarded the PGA of BC Junior Leader of the Year and Teacher of the Year in 2013 for the Vancouver Island region. 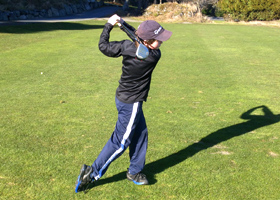 The first student has just attained ‘White Belt’ status in the program. Cole Daniel, a ten year old student at the GBC Golf Academy at Olympic View has shown promise and commitment. Look for his name as a top finisher in junior tournaments in the years to come. The ‘Belt System’ Program includes private one on one instruction as well as group supervised practice and skill building. The coaches at the GBC Academy at Olympic View are experts in this field.


It is certainly an exciting time at the GBC Golf Academy at Olympic View and it is nice to see programs for kids of all ages being developed.


For more information contact Jeff Palmer, Director of Instruction, at 250-474-3691 or by email at [email protected].