Visit the Golf Shop for the Latest Brands and Gear 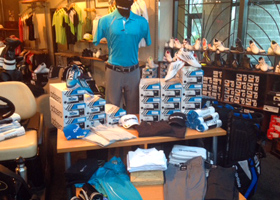 If you are waiting for the RBC Canadian Open to return to the west coast, don’t hold your breath. Brad Ziemer explains why, plus some random golfing thoughts as we officially enter the dog days of summer...

Just like that, the year is half over - Happy 150th Canada, by the way - and so far 2017 has been a good year for Canadian golf. And Brad Ziemer thinks it' going to get even better... read on why...

The GolfBC Group is pleased to announce that a total of $150,000 was raised for charity at the GolfBC Championship at Gallagher’s Canyon Golf & Country Club during event week of June 12-18, 2017.

Robby Shelton poured in a seven-foot birdie putt on the 72nd hole late Sunday afternoon to win the $175,000 GolfBC Championship.

Jared du Toit acknowledges he can be tough on himself on the golf course and that is one of the reasons why he loves having his brother Russell on his bag as caddie. While Jared may be more of a glass is half empty kind of guy, Russell sees that glass as half full.