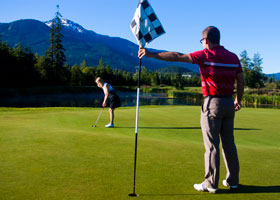 If you are waiting for the RBC Canadian Open to return to the west coast, don’t hold your breath. Brad Ziemer explains why, plus some random golfing thoughts as we officially enter the dog days of summer...
1st August, 2017Brad Ziemer, Guest Contributor

Just like that, the year is half over - Happy 150th Canada, by the way - and so far 2017 has been a good year for Canadian golf. And Brad Ziemer thinks it' going to get even better... read on why...
1st July, 2017Brad Ziemer, GolfBC Championship Correspondent

Jared du Toit acknowledges he can be tough on himself on the golf course and that is one of the reasons why he loves having his brother Russell on his bag as caddie. While Jared may be more of a glass is half empty kind of guy, Russell sees that glass as half full.
18th June, 2017Brad Ziemer, GolfBC Championship Correspondent